Our Lady of La Vang

Vietnamese Virgin Mary, Made in California

Every two years, more than 200,000 pilgrims make their way to La Vang, a poor farming village in central Vietnam. They come from the around the world to pay homage to the Virgin Mary, whose apparition visited the village in 1798 and gave comfort to persecuted Catholics. From Vietnamese American Catholics to Thai Buddhists, they come seeking her blessings, solace, and comfort.

“She is not just the mother of Catholics in Vietnam but also anyone who comes and prays to her,” an Indonesian Protestant once told me during a visit to La Vang. His comment echoed the feelings of many who made the long, arduous journey to the Minor Basilica of Our Lady of La Vang. Although the Vatican has not recognized the historical apparition, Our Lady of La Vang has become a global religious and spiritual symbol.

Over the course of a few days, pilgrims pray to a large statue of Our Lady of La Vang holding a figure of the baby Jesus. She stands under three large banyan trees, adjacent to an old church building, wearing traditional Vietnamese attire composed of an áo dài and a crescent-shaped headpiece. With her black hair, dark eyes, and porcelain skin, she reflects an ideal image of beauty in Vietnamese society.

As Vietnamese Catholics struggled to rebuild their lives in the United States, many sought comfort from the Virgin Mary. In 1978, more than 1,500 Vietnamese Catholics across the country attended the largest Feast of Assumption celebration in Carthage, Missouri, during a blazing hot August.[2] The multiday pilgrimage became known as “Marian Day,” attracting mostly Vietnamese of different religious backgrounds from throughout the world. In Carthage, pilgrims worshipped a statue of Our Lady of Fatima and one of Our Lady of Peace (Đức Mẹ Nữ Vương Hòa Bình). For many Vietnamese Catholics, the statues symbolize miracles but also have strong anticommunist connotations.

Created by sculptor Van Nhan, the white statue represents the Virgin Mary dressed in the Vietnamese national costume. She holds the baby Jesus in front of her with both hands, “as if she wants to hand her most beloved child to Vietnamese people in order to save them and their race,” according to the Vietnamese Catholic Center. She represents the “peace and tranquility” that Vietnamese American faithful seek as they adapt to life in a new country.

Our Lady of Vietnam also reflects Vietnamese American Catholics’ connections to coreligionists in Vietnam during a time in which the country was isolated from the United States after the Vietnam War. She stands on a grotto in the shape of an S that depicts Vietnam and its mountainous ridges. The Vietnamese Catholic Center explains that this representation of the Virgin Mary “guides the spirit of Vietnamese people to return to their homeland roots” and to pray for their coreligionists who are suffering under communism. This is another reason she is referred to as Our Lady of Peace.

In 1995—three years before the two-hundredth anniversary of the apparition of Our Lady of La Vang—the United States reestablished diplomatic ties with Vietnam. This timing helped to revive interests among Vietnamese American Catholics to reconnect to their homeland. In an article published in 1996, Vietnamese Americans were urged to visit the Our Lady of La Vang in Vietnam: “Now is the time for overseas Vietnamese Catholics to be spiritually united and connected with the Catholic Church in the homeland. This is our affirmation that, despite being far away from the homeland, we will never forget our spirituality as a Vietnamese faithful and a citizen of a country and a peoplehood.”[3]

Our Lady of La Vang became Vietnamized through collaborations and agreements that reached across the Pacific. Clergy from Vietnam had seen the Our Lady of Vietnam statue during a visit to Orange County following the US-Vietnam normalization. They were impressed by Vietnamese Americans’ commitment to the well-being of Catholics in Vietnam, and their commitment to the preservation of Vietnamese Catholic culture and history despite decades of separation from their homeland. As a result of the trip, the visiting Vietnamese clergy commissioned Nhan Van, creator of Our Lady of Vietnam, to create another Our Lady of La Vang for the anniversary of her apparition.

The growing global popularity of Our Lady of La Vang has spurred the construction of a number of parishes named after her outside of Vietnam, including two in California. These transnational ties are not simply nostalgia for the homeland but an effort among Vietnamese Catholics to heal the wounds of war and displacement. The Vietnamese Our Lady of La Vang represents re-connection among Vietnamese Catholics in the diaspora and the homeland after decades of separation. 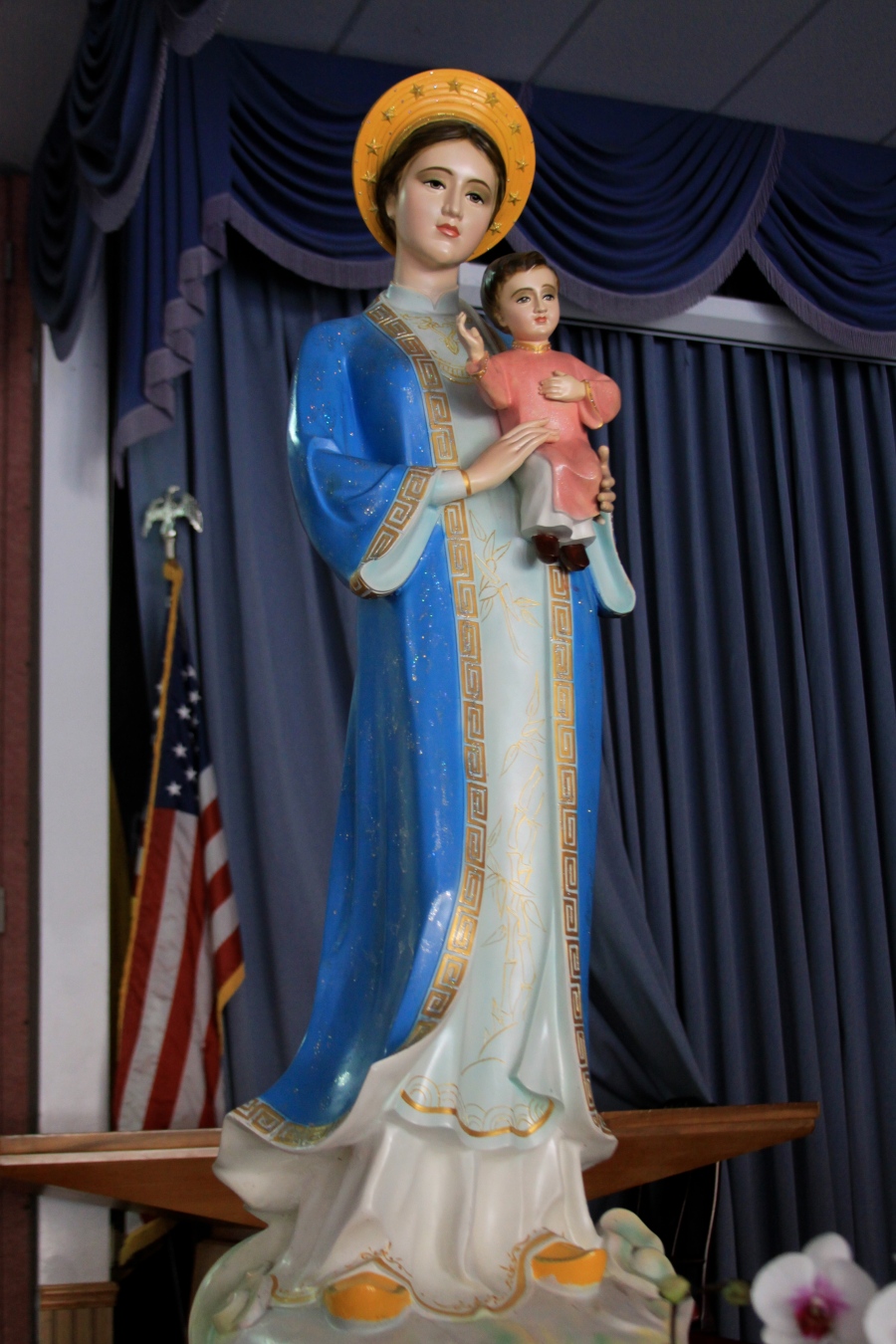 Thien-Huong T. Ninh is an assistant sociology professor at Consumnes River College and a scholar with research interests in race, gender, religion, and in immigration, particularly forced displacement as in the case of refugees. She is the author of Race, Gender, and Religion in the Diaspora: Ethnic Vietnamese in the U.S. and Cambodia (Palgrave Macmilllan).

Copyright: © 2018 Thien-Huong T. Ninh. This is an open-access article distributed under the terms of the Creative Commons Attribution 4.0 International License (CC-BY 4.0), which permits unrestricted use, distribution, and reproduction in any medium, provided the original author and source are credited. See http://creativecommons.org/licenses/by/4.0/.