Johnny Cash’s May 1968 album, At Folsom Prison, revitalized his career. Recorded live before two audiences of 1,000 inmates in a Folsom Prison dining hall on Saturday, 13 January 1968, the final song of both sets—and the eventual album—was “Greystone Chapel.” Cash had heard it for the first time just the day before his visit to Folsom. Floyd Gressett, a pastor from Ventura and a long-time minister to prisoners, had passed along a cassette to Cash ahead of the band’s Friday rehearsal. Gressett happened on the cassette tape from a Folsom prison worker earlier that day. The tape contained the track, written and sung by Folsom inmate Glen Sherley, whose deep voice, like Cash’s own, boomed from the tape to introduce it: “All right, this is a take on Greystone Chapel.”1

Made famous through Cash’s romantic mythologizing,2 the chapel itself has an unusual place in the life and history of Folsom. Folsom Prison was founded in 1880 to ease overcrowding from San Quentin. As with San Quentin, Folsom’s original blueprints show no sign of a chapel. It wasn’t until a decade later that Chinese convicts began constructing Folsom’s chapel, each several-hundred-pound granite stone cut by hand. Both prisons were modeled on the Auburn system, which used labor and discipline to instill respect for work and for others. America’s earliest penitentiaries carefully designed meaningful space for religious worship. Yet despite California’s emergence as a simultaneously secular and religious modern utopia,3 a secular vision dominated the design of California’s first prisons. Professor of Law and Literature at Columbia University Robert Ferguson calls today’s American prison a “peculiar version of hell . . . that the American separation of church and state has imagined” for its inhabitants.4 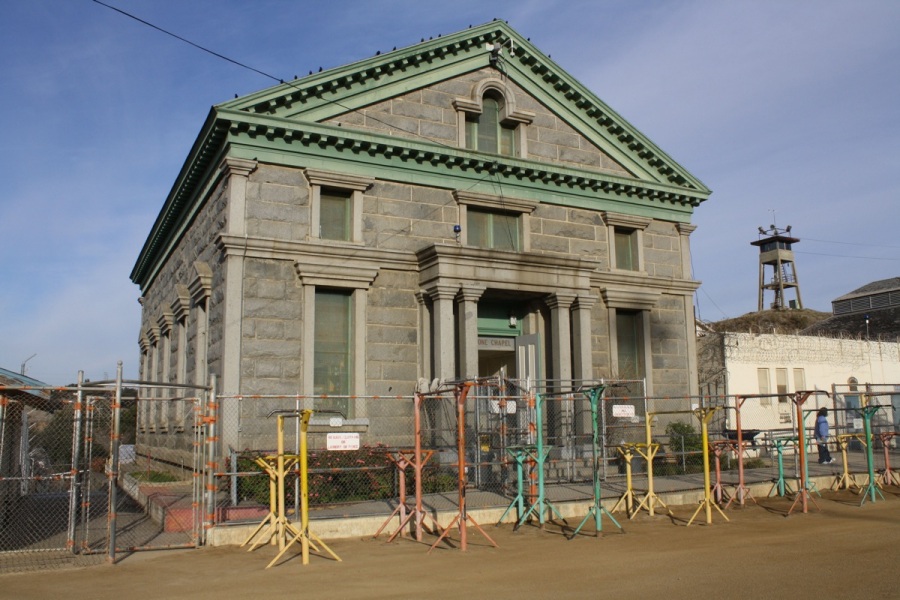 Set amid the wider prison buildings, designed in the Gothic style, Greystone Chapel was designed by Protestant prison officials as an austere space. When it was finally completed in 1903, it primarily served Catholics before taking on a life of its own. In 1909, along with religious chapel activities, it also functioned as a theater for the prison’s motion picture showings.5 It later became the site of a 12′ × 21′ replica mural of Da Vinci’s The Last Supper, painted between 1938 and 1939 by Hollywood set designer Ralph Pecor, who served time at Folsom for manslaughter.

Today, the chapel is used by religious and nonreligious groups that each rearrange the space to suit their needs. Muslims cover Pecor’s painting when they gather, and Mormons use the smaller rooms in the back. Sometimes inmates wander in during one of the multiple Sunday services, not entirely sure what they will find, or what they are there for. The chapel’s worn-out piano got a free tuning courtesy of John Legend and his crew when the prison hosted him on 20 April 2015 as part of his #FREEAMERICA campaign.6

Due to security issues, events like this aren’t advertised; inmates were invited to the chapel for a special concert performance, and those who had not already entered were shut out once they realized what was happening and who was performing inside. Events like this in Greystone Chapel or in prison chapels up and down the state provide a space for transcendence within penitentiary walls. Whether that transcendence is of a spiritual or more prosaic nature depends on many factors at play within the prison walls.

Religion has had a role in prisons for as long as they have existed in the modern sense. Even the word “penitentiary” has roots in the Christian concept of penance. Showing commitment to this idea, the British Parliament appointed and gave a salary to prison chaplains beginning in 1773—two years before even jailers received a salary. Today, Folsom prison employs chaplains from several different traditions: Protestant, Catholic, Muslim, Jewish, Native American. Only these chaplains get hired for full-time positions. No Buddhists, which is odd, this being California. No Hindu. No Sikh. No Eastern Orthodox, despite a rich California heritage of Greek, Armenian, and Russian immigrants. Even the best chaplains function largely as facilitators now, both for the informal activity among members of their own religious faith traditions and the mundane services they provide when chaplains for other faith traditions aren’t available to open chapel doors and provide resources essential for material worship. This is much different from earlier eras.

None of this is intended to suggest that Greystone Chapel has known only transcendence. The place has seen its share of vice and violence. Heroin has been shot up there, drugs and sex bought and sold, and murders committed. When the late Irish Catholic chaplain Father Denis Keaney, referred to by the inmates as the “Pope” of Folsom, saw Mexican Mafia member Mike Ison standing over an inmate he’d just stabbed in the Greystone Chapel, Keaney stated, “You’re in the House of the Lord!” To which, Ison replied, “The Lord won’t have to come far to get this one then.”7 Keaney was known not to take “any guff from anyone,” and once threatened to beat Charles Manson within an inch of his life.8

These sorts of things, however, are certainly exceptions in the life of California prison chapels, which are commonly understood to be “off limits” by inmates. By all accounts, the chapel is an altogether different space within the prison, set apart by a range of outside volunteer activity, and internally organized impulses of genuine reform, reorientation, and transformation focused on the moral and spiritual lives of inmates. It’s hallowed, treated as sacred space—a calm within the storm that exists nowhere else within the prison. This is not because the chapel is governed strongly by guards, chaplains, or even volunteers, although they are present. Instead, the space is regulated by the informal governance of “the brothers” (in male facilities)—those whose lives have begun a strange process of transformation, renewal, and redemption.

The space of the chapel, open to all inmates, is a great beacon of hope for everyone in a place that is, by all definitions, a massive failure of a social engineering experiment. Yet within the structures of the prison and deeply embedded into the life of the chapel are opportunities for renewal, and people who offer themselves and their lives in audacious ways—and at incredible risk—for the good of all. This is true when inmates break ranks from gang affiliations in pursuit of a lifestyle change, bonding together with members of other races from the newfound community, seeking a way out of the intense life on the yard, however deep they may be into the prison dynamics. In some cases, prisoners who have found a new life in the chapel, sometimes after significant personal debt from gambling or other activities, have found the incarcerated religious community willing to sacrifice and vouchsafe for the prisoner’s well-being and spiritual development, if indeed this pursuit is deemed genuine. Occasionally, when these individuals, sometimes major players in prison yard politics, make a genuine new commitment to chapel life, their former companions from the yard attend their rites of religious initiation (for example, baptism) or participate in other special religious services such as Ramadan, Hanukkah, or Easter. 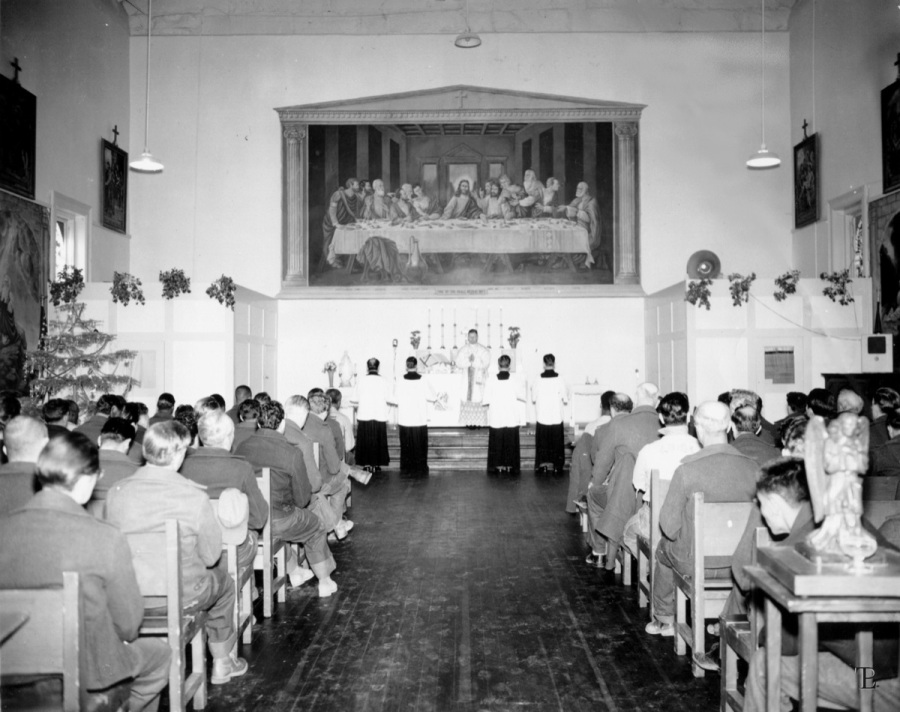 Greystone Chapel Interior during Catholic Mass, with Ralph Pecor’s The Last Supper in the background.

The prison chapel is a place of redemption for so many and fills this position in ways that resist the repression that the mechanisms of power within the prison are intended to generate. Indeed, the California Department of Corrections and Rehabilitation, since adding “Rehabilitation” to its name in 2004, professes to believe in therapeutic restoration and reintegration. Most prisoners will get out one day and, hopefully, will be able to contribute meaningfully to society. At Folsom, Greystone Chapel is a place where music, art, leadership development, repentance, penance, hope, and transformation take place—instantiations of what Michel Foucault called a “local situation” counting as “the contradiction to the whole.”9 It is the place where the contradictions of the corrections plus rehabilitation model are transcended. It is the place for renewal and even a kind of re-creation with new possibilities that Hannah Arendt argues only come by forgiveness.

The political struggle to reform the prison today often yields the kind of gridlock that can be subverted only through practices that radically respond to a vision of freedom not extant in any of the formal structures built by the prison, including the chapel. This kind of transcendent resistance gives rise to extraordinary action deeply foreign to the carceral setting: joy, peace, patience, kindness, gentleness, and self-control. The theologically minded might call it the fruit of the Spirit, or the beginning of a truly transformative healing process. Often, it is the experience of this kind of renewal lived out in the chapel that becomes the basis for wider involvement in prison transformative life. Here is where love is, where the members of the prison community pray for those inside, those outside, and those inside headed outside—perhaps the most fearful scenario. But here is where love, forgiveness, imagination, pardon, and grace become the only thing that can see this through in California, which has had a far stronger penal outlook than most care to realize.

The vast majority of California’s prisoners will eventually gain their freedom from the prison’s walls. Many will face enormous hurdles, from a lack of family and connections on the outside to a lack of skills that would enable them to find jobs—even if they were first able to find employers willing to hire someone with a felony conviction. To varying degrees, these challenges can be mitigated by programs both inside and outside the prison. What these programs cannot provide, however, is a lesson in what it means to be free. The denial of freedom is, of course, one of the purposes of the prison. But knowing how to be free, how to find joy and peace and kindness, and understanding the responsibilities that come with them are vital for life outside—and staying outside—of prison. There must be a place to learn them. For many in Folsom, as at many other prisons across the state, that place is the chapel. It is where incarcerated folks can see and find hope, even as the prison’s formal and informal structures and the world outside of the prison struggle to deliver an imagined rehabilitative vision still purported as possible, although often remaining elusive.

The prison chapel is a place of redemption in ways that resist the repression that the mechanisms of power within the prison are intended to generate.

Johnny Cash made music in the den of darkness. Many others bring their own kind of inspiration into the den and with it hope for the freedom experienced within the Greystone Chapel, inside the walls of prison. If hope and freedom can grow there, they can grow anywhere.

All photos courtesy of the California Department of Corrections and Rehabilitation unless otherwise noted.

2. There’s some question about whether Sherley actually wrote the song, which Cash began to doubt after advocating for his release from prison; Sherley later committed suicide, 11 May 1978. See Robert Hilburn, Johnny Cash: The Life (New York: Back Bay Books, 2013), 326–31, 438–40.