On the transit system we have, not the one we might have had, or wish we had.

On the transit system we have, not the one we might have had, or wish we had

Editor’s Note: This is an excerpt of Kristin Miller’s essay “Mapping our Disconnect” from our Summer 2014 issue.

When Stamen Design mapped the routes of the private buses that ferry techies between their homes in San Francisco and their jobs in Silicon Valley for the 2012 Zero1 Biennial, the aesthetic choice to render the map as a transit-system schematic made an open secret within San Francisco obvious to the world. The city is becoming a suburb of the Silicon Valley suburbs.

The “Google buses” had had the aura of urban myth since they began running in 2006. There was a vague sense of their increasing presence, but little knowledge about how many of the large, unmarked motorcoaches blended in with the tourist traffic on city streets. San Francisco’s transit authorities requested Stamen’s data because they were unsure how many tech buses were using city bus stops to pick up and drop off workers. The “Google bus” was mentioned in jealous wonder by those without a free, comfy commute, and more angrily when the arrival of the buses began to be implicated in ever-higher rents in city neighborhoods or when their outsize bulk bottomed out on San Francisco’s precipitous hills.

In a piece in The London Review of Books shortly after the appearance of Stamen’s map, Rebecca Solnit appropriated a geek-world in-joke from “The Simpsons,” dubbing the buses the “the spaceships on which our alien overlords have landed to rule over us.” But she and many others were not ready to welcome them. The buses had become a synecdoche—a part that symbolized the whole, like the crown signifies the monarch—for all the ways that the most recent tech boom was altering San Francisco. 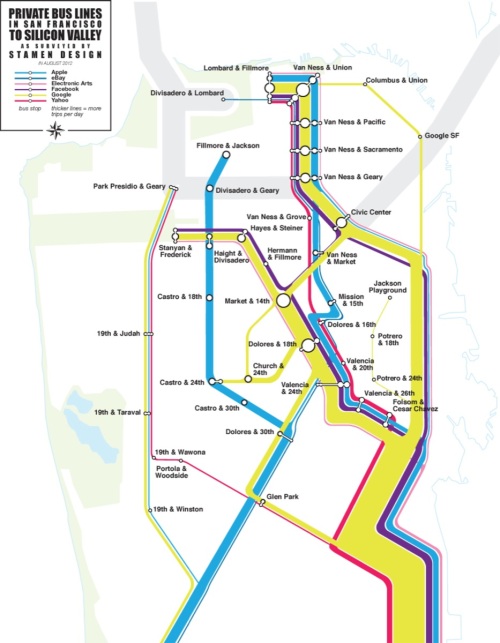 In 2012 Stamen Design mapped the routes of the private buses that ferry techies between San Francisco and Silicon Valley.

With a plan in hand that showed not only where the buses stopped but how often, San Franciscans suddenly had a sense of the impact of the tech shuttles. By adding width to the lines to convey the volume of riders, the map also showed the scale of the problem, using a venerable graphic technique famously used by Charles Joseph Minard to chart Napoleon’s campaign against Russia and eventual retreat with a much diminished army. By compressing the routes of Google, Apple, Facebook, Yahoo!, and eBay into a single visualization, Stamen’s design made it possible to argue that these routes in fact constituted a de facto transit system using city bus stops to move tens of thousands of people each day. In fact, Marty Lev, Google’s vice president of safety, security, and transportation, had said back in 2007, when the Google buses carried only 1,200 employees daily: “We are basically running a small municipal transit agency.”

A debate now rages over whether the buses should be permitted and taxed by the city. Tech bus stops in San Francisco and Oakland have been hit by direct action protests. A decision to charge the bus operators a $1-per-stop fee for using 200 approved city bus stops temporarily quieted the protests, but not the ill feelings.

The argument over the buses and the change they represent often breaks down into pro- and anti-tech camps, with personal attacks against the culture of tech workers or protestors, as embodied in a recent piece of street theater where a protestor playing a techie belligerently told those blocking a Google bus to “get a better job,” or the all-too-real comments made by former AngelHack CEO Greg Gopman that San Francisco is “grotesque” and “overrun by. . .drug dealers, dropouts, and trash.”

What’s really at stake—and what is foregrounded by visualizing the presence of the buses as Stamen did—is a failure of belief in the city as a commons, a city that supports existing residents and new arrivals by integrating them into the collective spaces and systems perhaps best represented by public transportation. That there are entire networks of free transit options available to only some of the city’s wealthiest residents cannot help but create tension, especially against a background of skyrocketing housing costs and a wave of no-fault evictions.