Regular Boom columnist Susan Straight on the nostalgia of The Outdoor Room.

From Good Living to Decadence

The quotidian patio. A cement square or even a long narrow apron of concrete. An aluminum roof or green plastic, crenellated so when rain ran down in rivulets, children imagined they were inside a waterfall. Supports of wrought iron or aluminum, sometimes wreathed with molded-metal leaves or vines for decoration. To cook? A hibachi or small Weber barbecue, the coals glowing like red piles of shredded wheat. To sit? Plastic lawn furniture, or metal chaise lounges with oilcloth cushions that stuck to skin and sealed in the sweat on a hot day, even in the patio shade.

Almost every yard I visited in my southern California childhood had this patio. Every ranch house in every tract, my uncle’s in Chatsworth, my friends’ in Riverside, my grandmother’s mobile home in Hemet.

We spun skateboards in dizzying circles around and around the cement, or sat on the strapped-plastic rockers listening to adults who laughed and drank Sangria. The 1970s. A patio was quintessential California.

Not a veranda or gallery or wrap-around porch or screened-in front. The patio was carefree, outdoor living.

Not now. If judged by countless ads in newspapers and magazines and television shows, California currently aspires to The Outdoor Room. The Extension of the House.

This isn’t about jealousy. It’s a little about nostalgia. But it’s also about the environment, and what we think of when we think of outdoors, and living. Must we tame every inch of the land we own? Are we afraid to have nothing to do out there? Didn’t we used to go outside to escape the formality and cleaning and worry of inside? 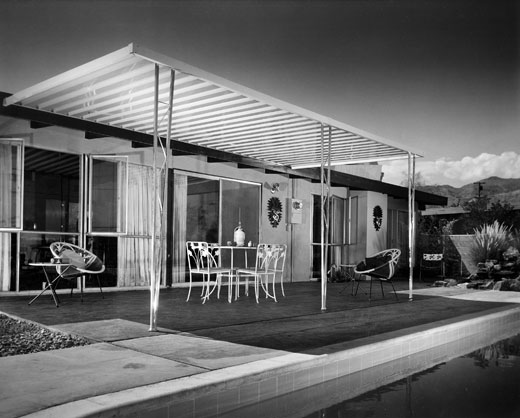 The Outdoor Room has real furniture, and coffee tables, and rugs, and lamps, and gauzy drapes at the edge of a structure such as a gazebo or permanent trellis. Copper firepits once were de rigueur, but now coveted are actual (though gas-fired) fireplaces, built into masonry walls. Chandeliers or elaborate lanterns overhead are advertised as appropriate. And there must be an actual built-in bar and grill in an island clad in granite or steel, with tall stools along the bar, and even a small refrigerator or stovetop so you don’t have to go inside to cook.

In other words, it’s a kitchen, dining area, and living room—outside. Under a covering of some kind. More house. More to clean and furnish, even in rain and wind.

By pools I don’t mean the above-ground kind some people used to have in my old neighborhood, or the small plastic kind which some people have in the front yards of my present neighborhood. (We don’t need to talk about the infinity pools, which I’ve only been close to one time, and I still don’t understand how the water spills endlessly into the horizon because I was afraid to go investigate.)

Stay with the patio. The word patio comes from the Spanish, those lovely private courtyards which we still see in Spain, in Mexico, in Italy, and in many architectural layouts here in California—especially the Mission Revival or Spanish-style homes of the past. And think of the missions. Each one was designed around a patio, where the residents gathered to feel a cool breeze or night air, to be protected in a central enclosed area against raiders, to visit and eat and pray.

Visitors to the missions today can see the particular appeal, and why those Spanish friars and priests transported the idea of the patio to California. But the Native Americans already had their own outdoor gathering areas, which influenced the patios of the missions where they worked and cooked and did laundry—seldom voluntarily. 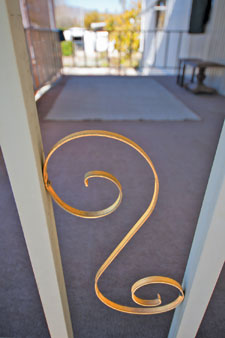 The various tribes in southern California had enramadas, outside spaces swept clean, shaded by wooden structures covered with palm fronds laid in a fringed pattern of shelter. Under these places they gathered daily and nightly, in the heat and in the cool. They tended firepits, sat on chairs and benches, wove baskets, and conversed. I remember sitting at San Juan Capistrano, in the patio, as a child, and thinking it the most beautiful place in the world. I remember travelling around America as a young adult and noticing what was different about the way people sat outside: porches in Minnesota and Massachusetts, screened against mosquitoes; verandas and galleries in Florida and Louisiana, with painted wooden floorboards and slow fans built into the wooden ceilings; fire escapes with one chair and a potted plant in New York City, which I thought the most exotic way to be outside back then.

But I loved my childhood patio.

On my own small brick-paved square in the backyard, under a wooden trellis tangled with wisteria, I still have a plastic-strapped rocker and the redwood picnic table my mother bought for her own first patio, a small cement rec-tangle attached to the back of her one-bedroom house in Glen Avon, California. I have a loveseat and coffee table as well—all-weather wicker from Kmart.

The magazines, however, show the elaborate, orchestrated Outdoor Rooms some Californians might love better, behind houses with cathedral ceilings and great rooms, screening rooms, and exercise rooms, eat-in kitchens and formal dining rooms. New tract homes advertised with up to six bedrooms and six bathrooms. And still another extension of formality and display seems necessary.

The quotidian patio may not be cool enough. But its simple elements can be cleaned with a quick hose-wash. And I’ve heard that Sangria, in an ironic and hip kind of winking way, is making a comeback.