David Serlin on bridging disability rights with the egalitarian and modernist principles of Universal Design. 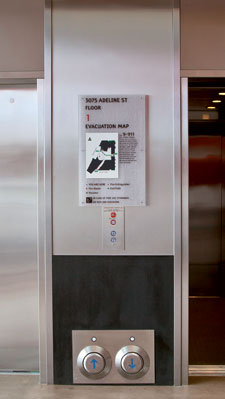 In 1972, the Center for Independent Living (CIL) opened in a former car dealership building at the intersection of Telegraph and Blake avenues in downtown Berkeley. The CIL emerged from efforts by activists to create a community resource for people with disabilities. Among the leaders was Ed Roberts, one of the earliest severely disabled students to attend UC Berkeley in the mid-1960s. The Center, with its DIY-style warren of makeshift offices decorated with mismatched furniture, became a geographical and symbolic site for the disability rights movement’s grassroots activism.

The CIL worked with engineers, architects, urban planners, and city council members to alter the built environment, a breakthrough concept in an era when disabled people experienced paternalistic and often exploitative care. Curb cuts for wheelchairs, for example, and audible crosswalk signals were installed throughout adjacent neighborhoods in Berkeley and Oakland. Raymond Lifchez, a professor of architecture at UC Berkeley, collaborated with members of the CIL to implement domestic designs based on what disabled people actually needed in their homes and workplaces to accomplish tasks by themselves, such as accessible ramps and platforms, lowered kitchen counters, lift bars for toilets and bathtubs, and so forth.

By the early 1990s, however, the scale and diversity of Berkeley’s disabled community encouraged the CIL and its numerous supporters to explore the possibility of reconceiving what and how the center actually accomplished its goals. While larger quarters might provide more resources and serve more people, many believed that a truly reconceptualized CIL would be rooted not only in the principles of disability rights but align them with the principles of Universal Design, first developed by disability activist Ron Mace at North Carolina State University during the late 1980s. Universal Design bridges egalitarian function with modernist aesthetics; among its most widely adopted tenets are structural flexibility, such as moving walls, and designs for low physical exertion, such as automatic doors and elevator buttons placed at floor level.

The CIL’s goal of bridging disability rights with Universal Design was finally realized when, in April 2011, it reopened in an 80,000-square-foot space incorporated into the Ashby station of the Bay Area Rapid Transit (BART) metro network, just on the cusp between Berkeley and Oakland. The building’s structural interface with BART includes a new public plaza, storage lockers, and a café, suggesting that it has retained and even expanded its status as a spatial crossroads for numerous urban needs and constituencies. Furthermore, the building’s energy-efficient ventilation systems and building materials, such as glass curtain walls that provide abundant natural light, underscore a vision of social justice through architecture galvanized by both Universal Design and the green architecture movement. A central helix-shaped ramp and wide corridors enable visitors to move around easily between floors, while fully accessible bathrooms, automatic doors and lighting fixtures, and way-finding devices for people with visual impairments send a fundamental message of inclusion and autonomy.

Some activists may mourn the loss of the CIL’s ragtag, DIY origins on Telegraph Avenue and bristle at the Center’s glossy sheen and well-appointed interior spaces. But the newly configured CIL, which has been renamed the Ed Roberts Campus of UC Berkeley, updates the radicalism of its organization’s most robust agitator for social and political change by recasting the building as a noble experiment in public architecture for the twenty-first century. Four decades after the Center’s original founding, and seventeen years after Roberts’ death in 1994 at the age of fifty-six, the Ed Roberts Campus has reimagined a local community institution as a sustainable and transit-oriented public space—one that demonstrates emphatically how designing for disability can lead to creative forms of collaborative urban redevelopment.